“Truly I say to you, wherever this gospel is preached in the whole world, what this woman has done will also be spoken of in memory of her.”

Indeed… This gospel is being preached in the whole world! But why is it that this woman will be remembered for what she did? This devotional is something special to me because of what this woman did, and I hope it will prove the same for you. Because it might be that you are troubled by this idea of value; value as—your faith in Jesus Christ to be your personal Lord, and Savior, who took away your sin—wondering whether you are worthy of such an anointing of salvation (1 Jo 2:27) by thoughts and feelings of past issues and present sins? How value is weighed and measured from a human or carnal perspective is costly because it’s deceptive. God is patient toward the activity of sin in this world for you, right now, reading this, because even the most unworthy can hear and believe this good news if their willing to receive it. But put this memory of the woman in your heart and mind as we learn just how worthy you are to God through what Jesus Christ did.

When Jesus was in Bethany, at the home of Simon the leper, a woman came to Him with an alabaster vial of very costly perfume, and she poured it on His head as He reclined at the table. But the disciples were indignant when they saw this, and said, “Why this waste? “For this perfume might have been sold for a high price and the money given to the poor.” But Jesus, aware of this, said to them, “Why do you bother the woman? For she has done a good deed to Me. “For you always have the poor with you; but you do not always have Me. “For when she poured this perfume on My body, she did it to prepare Me for burial. Notice how all the disciples became indignant or angrily suspicious at this treatment because their focus was in the value of the perfume, instead of Jesus. And one disciple in particular became so twisted in the heart giving root to that emotion of indignation sought the opportunity to betray Jesus (Matt 26:14-16) through the temple priests already conspiring how to kill Jesus (Matt 26:1-5); Judas Iscariot became the how to for the priests already under the influence of evil; the invisible work of the devil uses the justice and love of God to manipulate the human perception, in this case, the minds of the temple priests and the heart of Judas Iscariot.

Justice is the law of God that Jesus Christ fulfilled and still proclaims today (Mat 5:17, Mat 12:18); which means the continued sacrifice of lambs, the temple building and priests, have no longer been necessary for the forgiveness of sins; the death and burial of Jesus Christ is the passing of the old covenant, while the new covenant is born in His bodily resurrection (a new body). And the reason this woman anointed Jesus with the costly perfume is because she perceived the significance of the burial. The perfume represents you and the fragrance of you is a soothing aroma to God. Your faith is that fragrance of Jesus Christ to God that produces salvation in you as your sin dies and is buried forever by believing that your sin was taken away to the cross of Jesus Christ. It is buried in history. You are free! Now that we believe with confidence that Jesus was raised from the dead, we too are raised from the dead by grace through faith, having a clean conscience before the throne of God (a new body). Your sin has no power over you. So turn from your sin, and have eternal life in Jesus Christ (the Son of Man).

The featured image is from The CHOSEN season 1 episode 8 and it turns out that this series is reaching the world with the gospel just as this verse with words in red indicate would happen. And no, this is not a paid mention for The Chosen or any favor. This is just information, and hope, for reaching the world with the gospel that preaches Jesus Christ. 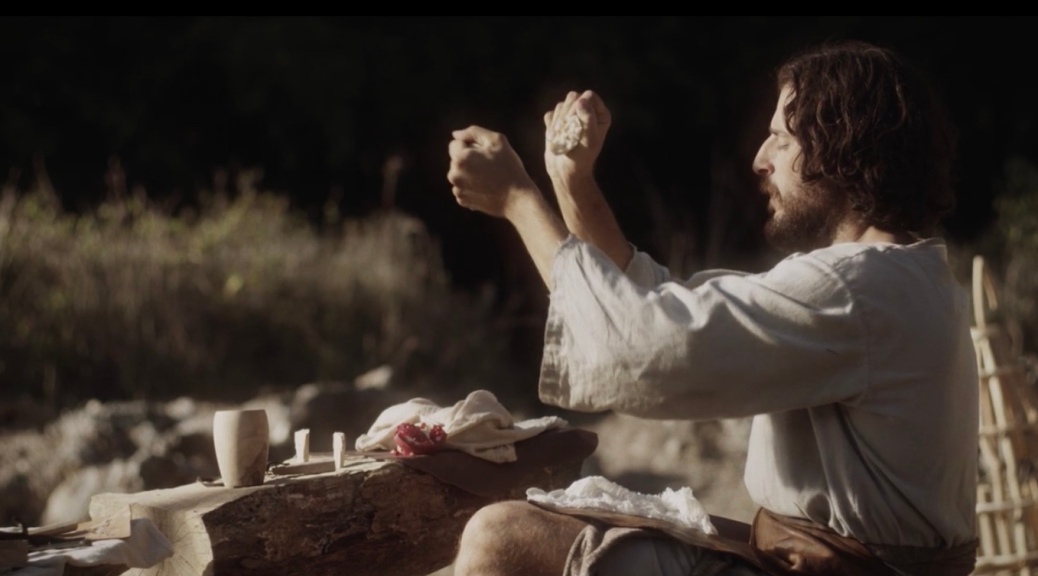 Has there ever been a time in your life where you had food prepared and ready to go for work but woke up late? You just left it thinking by some hope of providence, you’ll get fed. And it just so happened the boss brought donuts just for you to have an excuse to break that diet and get through the work day!

Or perhaps there was a time in your life where food was expected, but not given? Your friends invite you over for steak, you get there… no steak. What the heck! Turns out no one really cared about your appetite, and the lack of consideration is quite discouraging so you plot to kill em all.

Not really. But still! Not only is that plot idea relevant to this post, It’s time for some new friends, don’t you think? because true friends will treat you like a king or queen. And this post is about to become your friend.

BECAUSE YOU ARE A KING QUEEN!

Alright friend, let me take you back in time! lets hit the rewind from A.D. 2020 to peer into the time of A.D. 27 through A.D. 34! Who and what are you thinking about when this history comes to mind? For me… it’s about Jesus and what he did!

There was a time in history that maybe you’ve heard of? An event where 5,000 people went hungry for food after watching and following a man capable of doing miraculous signs. They of course knew this man as Jesus of Nazareth, until this event nearly changed everything!

They didn’t have vehicles back then so Jesus walked to the other side of the Sea of Galilee (or Tiberias) up on this mountain, and there He sat down with His disciples. See now… Jesus knew these people needed to eat and had a plan to feed them, but how in the world was he about to feed 5,000?

Even his disciple Philip was like, yo, “Two hundred denarii worth of bread is not sufficient for them” to even receive a little. But the point of all this was to concern themselves for the people, to feel and have compassion for these people traveling to see and experience these miraculous signs that Jesus is doing.

The reason for these signs is much more than just proof that Jesus is the Messiah, but an expectation for the King of the Jews.

Now that the hearts of the disciples were focused on compassion for these people in response to Jesus’s’ prompting question, “Where are we to buy bread, so that these may eat?”. Thankfully one of his disciples, Andrew, Simon Peter’s brother, *said to Him,  “There is a lad here who has five barley loaves and two fish, but what are these for so many people?” That’s like me asking…

Jesus knew what he was about to do and how it was going to reveal to compel their idea to make Jesus the King of the Jews, but not for the reason the Jews anticipated… which was to deliver them from the oppression of Roman governance.

So as you can see, this “lad”… had a significant role to play in bringing the 5 loaves and 2 fish because it is through this selfless act of provision that the miracle of feeding 5,000 persuades the crowd to force Jesus into becoming the King that delivers them. But that is not the reason Jesus was to become King, do you know what that reason was?

You might want to sit down for this… considering that was the instruction of Jesus at that time for all these people, “Have the people sit down.”. Gaw… I love this, because in it we can recognizing the work of God! This act of communion bears so much meaning and symbolism to the body of Jesus being broken on the cross… but we’re getting ahead of ourselves.

Jesus is already the King, but desires these people, his inheritance, the chosen of God to share in His Kingship. Behold Israel! For salvation is from the Jews! But because these chosen people so strongly desired deliverance from Roman oppression, missed the reality of their own sin.

And so this Prophet who is to come into the world withdrew himself from these people to be alone on this mountain. He was like, “yo Pops, I need some new friends up in this house, these people aren’t cuttin-it”. No… of course he didn’t say that, it was more like, “Truly, truly, I say to you, you seek Me, not because you saw signs, but because you ate of the loaves and were filled. Do not work for the food which perishes, but for the food which endures to eternal life, which the Son of Man will give to you, for on Him the Father, God, has set His seal.”

So now here comes the question, “What shall we do, so that we may work the works of God?”! Can you imagine eating your favorite donut without the side affects forever free, or how about a nice juicy steak for free whenever your appetite calls for it? I think that’s what these people had in mind, like yo…

But that wasn’t what Jesus was communicating and to their defense, they didn’t have a personal relationship with God through the seal of the Holy Spirit at that time to understand God intimately. That is what it meant to follow and believe in Jesus, to understand the heart and mind of God. But they just wanted the ability to have free food.

So then what is the answer to that question, “What shall we do, so that we may work the works of God?” Well… it’s this, “This is the work of God, that you believe in Him whom He has sent.” It’s quite simple really, believe in Jesus Christ. If you do believe, you’ll find that breaking open your Bible to John chapter 6 is where your spiritual meal is waiting.